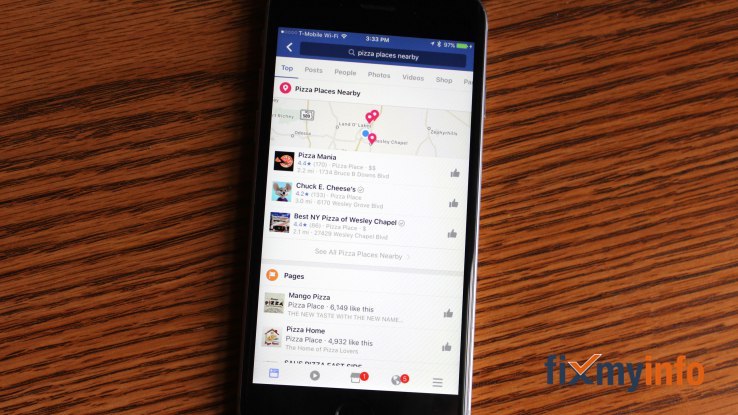 by Sarah Perez for Tech Crunch

Facebook is testing an enhanced local search feature that could see the social network creeping in on Google Maps, Foursquare and Yelp territory, TechCrunch learned and Facebook confirmed. Facebook users are now able to surface recommendations of nearby places – like “dinner nearby” or “bars nearby,” for example  – by entering a query in Facebook’s search box on the web or mobile. This returns a box in Facebook’s search results that include a list of relevant businesses, along with their ratings on Facebook, a map, as well as which friends of yours have visited or like the places in question.

A spokesperson for Facebook confirmed the feature saying, “We’re testing a new way to discover where to go and what to do around you.”

The company declined to share other information about the addition, including how long the test has been in progress. It’s possible some users have had this option for a much longer time, but others are only now gaining access or don’t have it at all, as is standard with Facebook’s tests.

The feature itself isn’t immediately obvious because the place suggestions aren’t always the first search result. On the web, the map and list of recommendations often show up as you scroll a bit further down, below the results for posts from Groups, links, posts from friends, and Facebook Pages.

But on mobile, the results are much closer to the top, if not the first item. (It varied depending on the query, in tests.)

The suggestions themselves are in a small box in the search results that includes a pink pin drop icon next to the heading, like “Shopping & Retail Nearby” or “Pizza Places Nearby” or whatever else you may have searched. Facebook is also prompting these searches via auto-complete suggestions from the search box.

It’s unclear how Facebook determines which results to show you in the small box, as it’s seemingly not number of reviews, rating, or proximity to your current location that determines which places are shown first. Nor is it social data  – for instance, a place visited by over a dozen friends was returned below one visited by just a few.

In addition to standard information like the business’s name, address, phone number, and photos, Facebook displays how many people have rated the business, its star rating, pricing (as measured by one to four dollar signs), whether it’s open now, plus the above-mentioned social data about your friends’ visits and likes.

Facebook is also using technology to parse users’ reviews in order to highlight what the business in question is known for, or what people talk about in their reviews.

For example, a bakery’s review might say that “people talk about friendly service, vegan donuts and iced latte.” (Nope, Facebook’s tech doesn’t have a grip on proper grammar just yet.)

Plus, the business listings may have a call-to-action, as they do on their Page – like “Sign Up,” “Shop Now” or “Call Now,” for example.

On the web version of the feature, you can filter the search results by price, places that are currently open, or other social metrics, like “visited by friends” or “good for groups.” Restaurants can also be narrowed down by cuisine (pizza, sushi, Chinese, etc.). And you can “Like” the business on both web and mobile.

Facebook is clearly taking advantage of its wealth of data on businesses and social metrics to build out this feature – an inevitable next step for the business, given the obvious opportunity for search ads.

This is hardly the first time that Facebook has dabbled with serving up local business info, however.

Way back in 2012, Facebook launched Nearby, following its acquisition of Foursquare competitor Gowalla. That feature did much of the same thing, and still exists in its present form from the “More” menu on mobile. The integration of “Nearby” suggestions in the search results seems more like an iteration on this earlier feature. But it adds functionality – like the calls-to-action and the algorithmically-parsed customer reviews – which makes it a bit more functional.

What’s interesting is that, despite everything Facebook knows about its users, the suggestions were not ranked as well as they could be. For instance, just because a lot of my fellow parents have hosted kids’ birthdays at Chuck E. Cheese, that doesn’t warrant the restaurant from getting top billing in a list of suggested pizza places. It also pushed a lacrosse uniform shop and the teen-focused Hot Topic to the top of its suggestions for “Women’s Clothing Stores Nearby.” Uh, no.

Above: various filters in the Nearby feature in search

Either Facebook isn’t fully tapping into its data to make these suggestions, or its data alone is falling short. If the latter, it could use another infusion – like the data from Foursquare.

Facebook had skipped over Foursquare years ago in favor of Gowalla. But today’s Foursquare is more powerful than the social check-in app of the past. Its database of locations is integrated into over 100,000 apps (including Snapchat), it offers businesses useful analytical data on foot traffic, it partnered with Nielsen to map digital ads in order to connect them to real-world traffic and sales, and it just rolled out a push notification-based recommendation engine to developers.

It’s not hard to imagine how well these features would fit into Facebook given how closely they’re aligned with Facebook’s own goals. But Foursquare’s trouble with finding an exit has always been about its price and valuation.

In the meantime, Facebook’s existing “Nearby” feature and this new local search addition pale compared with what Foursquare, Yelp or Google today offer consumers. It’s handy, I suppose, if you happen to be on Facebook, but it’s not worth launching Facebook for this alone when better options exist.