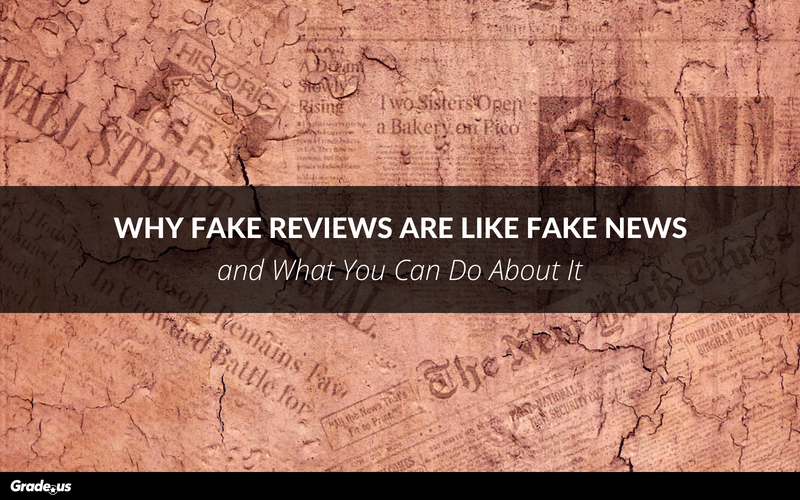 Can I trust you?

It’s the question your customers want an answer to. It’s also why customers turn to online reviews from a trustworthy, unbiased third-party source.

Fake reviews are the problem.

Customers can’t always trust marketers to deliver on their promises. Research shows entrepreneurs, marketers and sales people are viewed as the least trustworthy. It’s the reason why we have online reviews in the first place.

Reviews from customers who can give a first hand, unbiased account of the products and services they’re interested in.

They thought they could trust these reviews.

But fake reviews are damaging review platforms like Yelp, TripAdvisor, Amazon, etc. Most sellers know the value of a five star review. Businesses know reviews are kingmakers after all. They attract customers in droves, boost conversion rates and increase revenue.

Which is why reviews are so appealing to sellers.

Dishonest sellers use fake reviews to steal from you

They aren’t interested in doing the hard work it takes to get a legitimate review. Why go above and beyond for a customer, providing them with an exceptional product or service? They just need to launch a negative review campaign attacking your business, product or service. They create an avalanche of misleading reviews about how terrible you are.

At least, that’s the rationale. These dishonest sellers feel it’s easier to take the easy way out. They post a yucky ad on CraigsList requesting an online review, in exchange for a few dollars.

Then there’s ingroups and outgroups. Some sellers are attacked by reviewers who aren’t part of their “tribe.” These reviews are looking to hurt these sellers.

Ayesha Curry’s restaurant is coming to Houston, and #Rockets fans have already piled up the 1-Star reviews before it even opened

The Golden State Warriors defeated the Houston Rockets, in the NBA semi-finals.

How did fans respond?

They flooded Curry’s restaurant with fake one star reviews before it’s even opened. Aaaand then there’s Sarah Huckabee Sanders. She’s the press secretary for the Trump administration. She ate out with friends and the Red Hen restaurant in Virginia. After speaking with her staff, Stephanie Wilkinson, co-owner of the Virginia restaurant asked Sanders to leave.

The backlash was swift and severe. Negative reviews poured in via Facebook and Yelp. Reviewers shared their hostile feedback in an effort to destroy the Red Hen. Some explicitly stated why.

Regardless of where you fall on the political spectrum, one thing is clear. Most of these one star reviews are fake.

It’s incredibly frustrating and very discouraging when you’re on the receiving end of these fake reviews. It’s easy to understand why business owners feel helpless and lost when they’re attacked by dishonest competitors and angry reviewers who are looking to game the system.

But the results are typically the same. A dishonest seller is caught, eventually. The outcome is largely negative and the seller’s reputation with customers is ruined. Fake reviews are removed or buried.

Are they really though?

Are seller reputations really ruined by this kind of dishonest or bad behavior?

Who were the guilty parties?

These agencies lied to customers for more than a year.

It took some time, but eventually these businesses were caught. Each of these businesses entered into “Assurances of Discontinuance,” forcing them to discontinue their reputation management services.

Most of these companies didn’t survive. That’s the problem with fake reviews. They’re not valuable as one-offs. If agencies are looking to lie to their client’s customers, they’ll need a large amount of fake reviews.

Which only makes things worse.

The more fake reviews you have in your review portfolio, the greater your odds of getting caught. The value dishonest sellers receive from fake reviews is self-defeating. It becomes the proverbial noose around their organization’s neck. Eventually they’ll be caught.

Here’s the bigger problem with these fake reviews.

Google, Amazon and Facebook are struggling to keep up.

Google Maps is flooded with fake reviews and non-existent listings from fraudulent sellers claiming homeowner addresses. Amazon sued 1,114 fake reviewers on Fiverr.com, relying on lawsuits and the court system in hopes of reducing the deluge of fake reviews from third party sellers.

As a result, these “growth-hacking” scams have resulted in consumers scheduling appointments with non-existent companies. Customers have unknowingly purchased products and services from dishonest sellers who haven’t earnedtheir business.

All this means customers are less likely to trust brands.

Will customers trust an authentic review?

If they can tell the difference between genuine and fake reviews. Which is exactly the problem with fake reviews. It’s getting harder and harder to tell them apart.

Which leaves you with only one option. You’ll need to be more trustworthy than you already are.

You’re probably already doing the right things. You’re treating your customers well, you under promise and over deliver. You give customers your very best. Now you’re expected to do more, because dishonest sellers are too crooked to do things right?

The dishonesty of competitors around you corrupts your environment. Their bad behavior, like fake news, seeds the marketplace with distrust. Day by day, customers, employees and suppliers in the industry learn to trust a little less.

The antidote to the scheming, dishonesty and distrust in your environment. It sounds nice but what does that mean exactly? Create the right ingredients for trust to flourish and your company can withstand the second-hand fallout that comes from dishonesty.